While it may seem niche and unexpected to a lot of people, in the culinary industry sea moss is being used more and more as an ingredient in both high-low-end restaurant settings and also has seen an increase in usage for everyday consumers at home. While sea moss itself may sound like a very straightforward ingredient; there are lots of variants, colors, forms, and types of sea moss that can be used all with their own specific uses and benefits. When shopping online or in stores for sea moss, you will very commonly see ‘Wildcrafted sea moss’ as this is among one of the most popular types for consumption.

What Is Sea Moss?

Sea moss is a common type of red algae that also goes by other names such as Irish moss or more scientifically, Chondrus crispus. As you would assume, this is very simply just moss that has grown in and around the sea.

The mix of nutrients and resources in the sea can sometimes create physical vegetation. This is seen all the time in smaller scales such as when a swimming pool or fish tank naturally grows algae and moss. While it is quite similar, sea moss is at a much larger scale than these examples and can be quite astounding to see. It collects on rocks near the shore and can be harvested.

There are many uses for sea moss as it has quite a few nutritional benefits and scientific properties that make it very unique and specialized for an array of uses. One of these uses is as a thickener for dairy products. The entirety of the sea moss is not needed for this, but the ingredient carrageenan is harvested from the moss and is then used as a thickener.

Other than this ingredient, sea moss can come in a lot of other forms that are more suitable for consumption such as supplement pills, gels, powders, and gummies. The majority of these are for taking almost instantaneously and on their own with the biggest exception being the gel. While the gel still contains all of the nutrients and benefits that the other forms have – it can be used quite differently. The sea moss gel can be mixed in with other liquids and ingredients to help bolster their nutritional values. 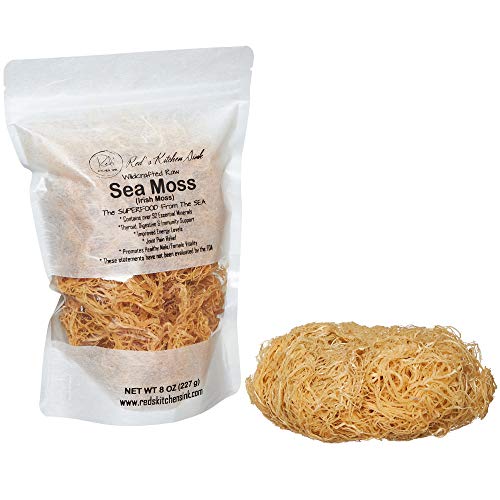 What Is Wildcrafted Sea Moss?

When shopping for any kind of sea moss, whether it be fresh, processed, or a supplement, you will very commonly see some types being labeled as ‘wildcrafted’. It is not always immediately noticeable what this actually means which can lead to a lot of confusion.

Wildcrafted is a term used to describe the harvesting methods of sea moss. When it is labeled as “wildcrafted”, this means the sea moss has been harvested from beaches and shorelines in areas where sea moss naturally grows in abundance.

There are many ways people choose to harvest the naturally growing sea moss and there are some ethical issues/questions that come with the process as sea moss, just like seaweed, is part of an ecosystem that is heavily dependent on staying in balance.

When harvesting sea moss, some farmers can be very careful and only cut off a small bit of the moss, leaving the root mostly intact so that it can keep growing and producing whereas other farmers will be more careless and cut the majority of the sea moss up. This sometimes does not even include a gentle cutting as farmers who are less concerned about the environmental impact will just rip the sea moss from the water without any hesitance.

As previously mentioned, sea moss will have a lot of uses which can vary depending on how it is processed. If it is dried and turned into a powder, it can be used as an ingredient to help with the nutritional value of a meal or a cooked product. However, sometimes sea moss can find use in being included in a supplement pill as a direct contributor to the health benefits of the said pill.

When sea moss is used in a more natural state it has fewer uses as both the texture and flavor can be pretty difficult to pair with other things. Dried sea moss can be commonly found for sale and will either be consumed directly by eating it or it can be then further processed into a powder or a pill as a dried ingredient is easier to manipulate.

Another use of sea moss in a consumerist way is for it to be made into ‘sea moss water‘. This is hydrating as well as slightly nourishing with nutritional benefits. 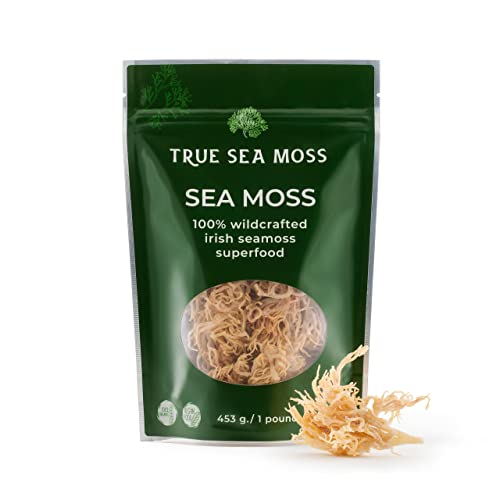 Is Wildcrafted Sea Moss Better Than The Alternatives?

The defining factor for what makes one product ‘better’ than another will vary from person to person. While it is true that with a lot of ingredients and produce, fresh and authentic versions are the most opted for and preferred. However, when it comes to sea moss not everyone prefers it to be fresh and authentic for many reasons.

While the health benefits of sea moss are very good and noticeable, a lot of people have an ethical issue with the way it is harvested that cause them to prefer artificial alternatives. These alternatives still contain a lot of the nutrition found within genuine sea moss but are also much healthier and more sustainable for the planet.

There are many reasons why wildcrafted sea moss is unethical and dangerous and all of them relate to the vulnerability of our oceans and their ecosystems. A lot of ecosystems depend on balance within the system and will fall into disarray if this is disturbed. Harvesting sea moss in a careless manner that uproots the moss will cause damage to the ecosystem as it removes not only a very large part of the vegetation but will also remove any microorganisms that are living on the moss. Real sea moss can be defined as better by some people, but the difference in quality between wildcrafted, pool-grown, or artificial sea moss might not be great enough for the sacrifice to be worth it in terms of the safety of the ocean and nature as a whole. Natural is not always better if there are safer alternatives.

What is wildcrafted sea moss good for?

Wildcrafted sea moss is good for being used in multiple ways such as a thickening ingredient or as an ingredient in a dietary supplement pill. The ingredient found within the sea moss known as carrageenan is used to help thicken dairy products such as ice cream and give them their creamy texture.

What is the difference between Wildcrafted sea moss and Irish sea moss?

A lot of sea plants can be confused with each other as there are so many and all of them can be quite similar due to their very similar growing environments. Sea moss is one of the most commonly misnamed plants in the sea. Irish sea moss is found on the Atlantic coast of Europe and is also seen in North America. However, wildcrafted sea moss is not a different species but actually refers to a harvesting method similar to when eggs are labeled as ‘free-range’.

A lot of naturally occurring ingredients in the world can be described as being better when they are fresh and unbothered by more streamlined farming techniques. Sea moss may be an exception as alternatives can provide the same chemicals, ingredients, and nutrients as the wildcrafted variant yet without damaging the planet or the ocean. A lot of wildcrafted sea moss is harmful to the shorelines so an alternative would not necessarily be seen as an inferior product.

What is Wildcrafted sea moss?

Wildcrafted sea moss is sea moss that is naturally occurring and growing on rocky shorelines or beaches along the sea. It is called wildcrafted because it has been naturally formed by the ocean and the algae/vegetation in it. Other than this, wildcrafted can also be used as a way to describe sea moss that has been farmed and harvested from these very locations to help distinguish it from pool-grown or artificial products that are similar.

Why is Wildcrafted sea moss better?

Wildcrafted sea moss can arguably be described as better as it is naturally occurring and can sometimes be slightly stronger/richer nutritionally than any pool-grown alternative. Other than this, many people can argue that it is not an ideal ingredient to harvest as it can cause irreparable damage to our shorelines and oceans as it leaves the ecosystem it grows in weak and unbalanced.