If you’ve never had taro milk tea, then you are in for a treat. A few years back I was visiting my friend in Asia, the tea capital of the world. Her enthusiasm toward taro milk tea meant that I had to try it. She wasn’t wrong either! The soft lilac drink is not only eye-catching, it tastes amazing too. In fact, sometimes there is actually no tea present in taro milk tea! So what makes this tea so delicious? What does taro tea taste like, exactly? Keep reading below to find out more!

Believed to be one of the oldest crops on earth, taro is a tropically grown crop in Asia. It is believed to have grown for over 10,000 years.

It is a major dietary staple throughout Asia, and many Pacific Islands, such as Fiji, New Zealand, and Hawaii.

Taro is a root vegetable coming from the plant called Araceae. The leaves are edible too and are actually heart-shaped!

The color of taro root is dependent on where it is cultivated but it can be white, purple, or pink. The root usually is covered in brown skin, and inside has white flesh with tiny purple spots.

The texture of taro is very similar to that of the potato because it is quite starchy. Also, people eat taro as they would a potato. Taro can also be boiled, fried, roasted, or baked.

When cooked, taro tastes something quite similar to that of sweet potato. Taro is like a more vanilla-flavored, floral-tasting sweet potato.

It is also dependent on the way that the taro is prepared because fried and roasted taro tastes very similar to that of sweet potato.

Flavors of foods can taste different from person to person.

For some people, taro boba resembles a mild chocolate flavor. Others can taste caramel, coconut, or vanilla.

That being said, others describe the taste of the tea as nutty, milky, creamy, or buttery.

There isn’t much of a similar taste to normal tea from taro boba. But let me explain.

Normally, when you order a taro milk tea, there won’t be any tea present in the drink. Taro boba tea can be made with just the root mixed with milk. In this instance, there is nothing in the drink that would give it a tea flavor.

While taro milk tea has an earthy tone from the nutty flavor of the root, this flavor is quite different to the earthy tones which you find in regular tea.

However, if you order a taro milk tea with a tea base (for example, ceylon or green tea), then that will certainly explain why it tastes similar to tea.

What Is Taro Milk Tea?

As you already know, taro can be used in many dishes. In fact, it can be eaten as a dessert. Or be an ingredient for drinks. The taro root can be used to make tea, cocktails, or even a taro smoothie.

A popular way of using taro root is in dessert drinks, aka milk teas.

There are many different profiles for which taro milk tea has. The main flavors are sweet, nutty, and vanilla flavored. Depending on where your taro milk tea is being made, you might get different tasting notes for each place.

Below I will run through the flavor profile of each of the strongest flavors in which people have tasted from taro milk tea.

There are many different tasting notes to taro tea. but above all, you should know it tastes super sweet.

Many people describe it as tasting like the leftover milk from a bowl of lucky charms, white chocolate, caramel, or melted marshmallow.

Others have said it tastes like Captain Crunch or cake flavored. Cookies and cream or buttered popcorn jelly beans are other flavor profiles that have been used to describe the taro boba taste.

The nutty flavor of taro milk tea resembles a nut that is quite fatty – similar to an enriched, earthy mix of pecan and walnut.

Vanilla is another strong flavor that is given off when tasting taro. The vanilla flavor makes taro perfect for making ice cream or even taro-flavored mochi. 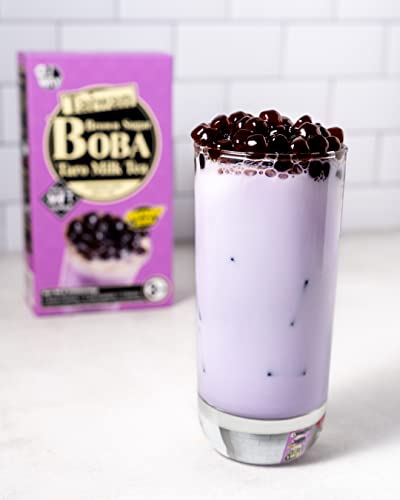 Why Is The Taste Of Taro Milk Tea So Familiar?

It has often been said that when people try it for the first time, they recognize the taste of taro for some reason. This may be because taro is actually sometimes used in baby food!

So, people have recognized the flavor from back when they were a toddler. This recognition almost brings a nostalgic element, which I think almost enhances the flavor.

Also, as previously mentioned, taro milk tea has more of a nutty, sweet, vanilla-like flavor. If you usually drink your tea with lots of creamer, sugar and milk, then you may find some similar tastes to tea that would come from these additions.

How Is Taro Bubble Tea Made?

If you are buying your tea from a boba shop, these shops will usually produce the drink using taro powder. You can even produce taro milk tea from home if you purchase this 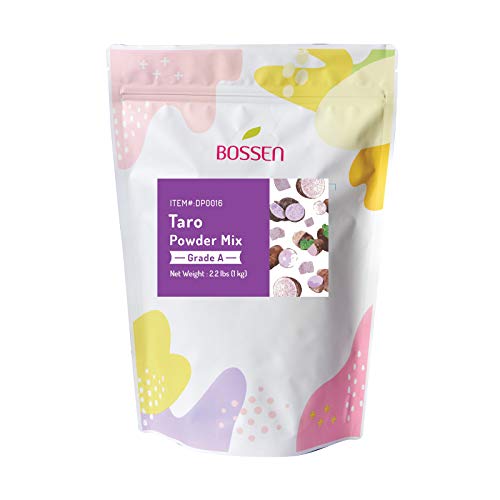 There are many different health benefits to consuming taro root.

Firstly, taro root is rich in fiber, magnesium, vitamin B6, and potassium. The starch content and high fiber are great for controlling blood sugar levels, while decreasing the risk of heart diseases.

Taro is also a great substitute for potatoes or other high-calorie carbohydrates because taro is naturally lower in calories. Taro is good for digestion and can help to improve poor digestion. Once again, it is important that if you are drinking taro milk tea for the health benefits, you should order your drink without any sugar in it.

For more information on the health benefits of taro milk tea, check out this video below!

What Flavor Goes With Taro?

Taro pairs the best with coconut. If you add taro to plain flavors such as coconut yogurt (or even normal yogurt), it truly enhances the flavor. If you add taro to sweeter dishes, such as mooncakes or pudding, it helps to balance the sugar while adding texture to the dish.

If taro has been fried or roasted, it smells very similar to that of sweet potato or parsnip. Boiled or mashed taro root is more similar to normal potato prepared in the same way.

Does Taro Have Caffeine?

Fresh taro does not naturally contain caffeine. Unless your order contains a real type of tea such as black or green tea, the caffeine content of taro milk tea is nonexistent.

If you haven’t tried taro milk tea already, hopefully, this description will have compelled you to try this delicious tea! This deliciously nutty, sweet, vanilla-flavored boba is such a treat. And thanks to the (nearly nonexistent) caffeine levels, can be enjoyed at any stage of the day!

Let me know what you think of this tasty drink in the comments, or if you’ve any other additions to the tea I’ve missed out on, I want to hear about it!