Yes, evaporated milk does expire, but not as quickly as you might think.

Unopened evaporated milk is shelf-stable and can sit in your pantry for months on end. In fact, most evaporated milk will stay consumable even up to a couple of months after the date printed on the label. Therefore, it is perfectly fine for you to use evaporated milk that is unopened, even if the milk is past the expiration date. Just be sure not to wait too long after expiry; the longer you wait, the better the odds that you could get food poisoning.

Having said that, once you open a can of evaporated milk, you will want to use it quickly. Evaporated milk lasts anywhere from 2-5 days depending on the brand. Carnation evaporated milk claims to last about 5 days versus other milk brands that only last 2-3.

To know for sure, be sure to read the label on the can. Discard any milk left over after the amount of time the opened evaporated milk should be refrigerated has passed. 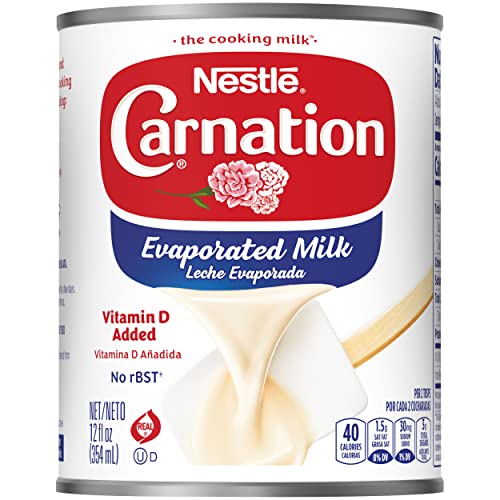 How Long Can You Use Evaporated Milk After the Expiration Date?

Evaporated milk can be used a few months after the expiration date. Some even claim to have used their unopened evaporated milk for up to a year past expiry.

The most important thing is to use your eyes and nose to determine whether or not your milk is still safe for consumption. Especially if you choose to consume the evaporated milk much after its printed expiration date.

If upon opening your evaporated milk it ever looks chunky, thick, or has otherwise changed its texture, be sure to throw it out. Also, if the color or smell of the evaporated milk has changed, be sure not to consume it.

You also will not want to consume evaporated milk, or any other product that is canned, that has visible damage to the can. This can lead to botulism or an otherwise contaminated product.

Note: Evaporated milk has a slightly golden color. This is normal and is retained because of the heating process involved in making evaporated milk.

What Can I Do With Expired Evaporated Milk?

How Do You Tell If Canned Evaporated Milk Is Bad?

Canned evaporated milk is bad whenever it develops an off-color, strange texture, or bad taste. We recommend you look at the texture and give the evaporated milk a sniff before using it, especially if it is beyond the printed label date.

Consuming evaporated milk that is old can give you digestive issues the same as would regular milk that has gone bad. Symptoms include abdominal cramps, nausea, vomiting, and diarrhea.

Chunky bits in your evaporated milk, a sour smell, or a color that is different from the usual off-white hue are definite signs you should toss the milk and opt for a fresh can.

What Happens When Evaporated Milk Expires?

When evaporated milk expires, you may still be able to use it, but it will depend on a few things.

As mentioned before, you’ll want to observe the milk to ensure that it is still edible and smells okay, especially if the can has been opened.

If the can was opened, you must use the milk within 2-5 days to avoid getting sick. It also needs to be stored in the refrigerator during this period of time. Do not consume milk that has sat open and out of the refrigerator for more than 2 hours.

If the can was not opened, the milk should be fine to consume as long as the can isn’t severely dented, bulging or the milk isn’t more than a few months past expiry. If the milk is older than a few months after the date printed on the label, be very careful when attempting to use it.

Consuming evaporated milk that has expired can lead to stomach ailments and food poisoning. These can be occasionally accompanied by a fever, and most often vomiting, diarrhea, and abdominal pain.

Can You Get Sick From Expired Evaporated Milk?

As mentioned, all evaporated milk that is opened and refrigerated must be consumed within 2-5 days.

Common signs of illness after having consumed spoiled evaporated milk include:

Is It OK to Use Expired Evaporated Milk?

Is Expired Evaporated Milk OK to Use?

Expired evaporated milk is okay to use, provided that it:

When using expired evaporated milk, only do so with milk that is deemed safe to drink. Add it to sauces, casseroles, baked goods, pasta, dressings, soups, and whatever else your heart desires to make good use of canned evaporated milk before tossing it out. You can even make your own whipped cream using evaporated milk; who knew!

You Can Do A Lot With Expired Evaporated Milk!

The bottom line is that you can do a lot with expired evaporated milk. This is provided that the milk is still edible. From sauces to baked goods and so much more, evaporated milk is a versatile ingredient. It lends itself to many cooking dishes that require a milk base or a creamy substitute.

Know that drinking expired evaporated milk that is unopened in a can is generally regarded as safe a few months after the date printed on the label. But we don’t recommend you drink evaporated milk any older than that. Evaporated milk that has been opened and stored longer than 2-5 days should be thrown out. It should not be used in any recipes as doing so may cause those consuming the dish to become sick.