Have you ever heard of sea moss water? You may have become accidentally entangled in the sea moss rave, and for good reason. Sea moss is a fantastic form of nature’s elixir, providing our bodies with the vitamins and minerals it requires in order to function properly. If you’re wondering how to make and drink a scrumptious sea moss juice, then you’ll find the recipe outlined below. And if you’re a little intrigued by sea moss’ incredible abilities, then I’ve got you!

What is Sea Moss Water?

Sea moss water is essentially water that has been infused with dried sea moss.

Sea moss is a type of seaweed that is loaded with nutritious elements such as iodine, calcium and magnesium. This special moss is often used as a natural tonic for a variety of body-related issues including digestive issues, thyroid problems, and respiratory infections.

Sea moss is a type of seaweed that grows naturally along the rugged coasts of many parts of the world. There are many varieties of sea moss, all of which provide an abundance of nutrition once ingested.

Sea moss can be consumed in many forms, including powder, capsules, drinks or gel.

Sea moss possesses an incredible variety of vitamins and minerals, that are not only beneficial to your body, but promote a healthy lifestyle once incorporated in your day-to-day diets.

For a healthy and nutritious lifestyle, your body requires 102 minerals to function properly, and sea moss contains 92 of them, so you’re off to a great start! 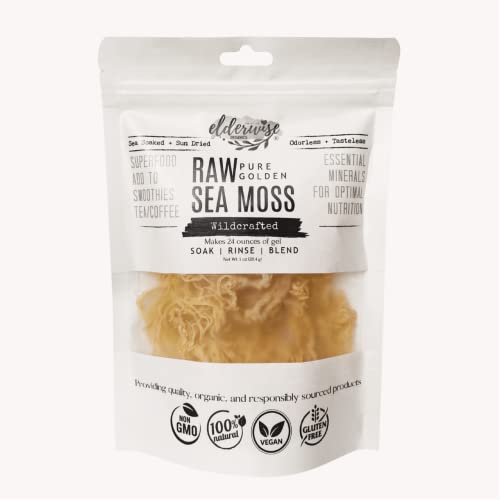 The major distinction between sea moss water and sea moss gel lies in their potency.

Where sea moss gel carries a strong fishy taste, sea moss water imparts an earthy flavor that isn’t quite as unpleasant as sea moss gel. The great thing about sea moss water is that you can drink it like water, whilst obtaining incredible nutritious benefits.

Another major difference between the two is that sea moss gel is often made with boiling water, which can potentially destroy most of the nutrients in the sea moss.

If you’re looking to absorb maximum sea moss benefits, then you should attempt to make sea moss water instead of sea moss gel.

Sea moss juice is often made using sea moss water or gel, as well as a bunch of fruits, veggies, and sweeteners to make the nutritious drink more enjoyable.

The main difference between the two is in the way they’re produced. Sea moss juice is more fruity and flavor-filled, masking the intense textures and flavors of sea moss gel.

On the other hand, sea moss water is created directly from the source. This means that dried sea moss is soaked, strained, and consumed.

People can consume sea moss in a bunch of ways.

You can drink fruit-infused sea moss water, or you can opt for spoonfuls of sea moss gel and add this to your morning smoothies.

If you’re wondering whether sea moss water is better than sea moss gel, then this will rely on your personal preference. Both forms of sea moss provide incredible nutrition, and if you’d rather take small sips of nature’s elixir throughout the day, then perhaps sea moss water is the better option.

Albeit, if you’re more of a smoothie drinker, and cannot bare to start your mornings without a refreshing smoothie, then opt for sea moss gel. Additionally, you could choose to make sea moss water, and use this as a base for your nutritious smoothies. 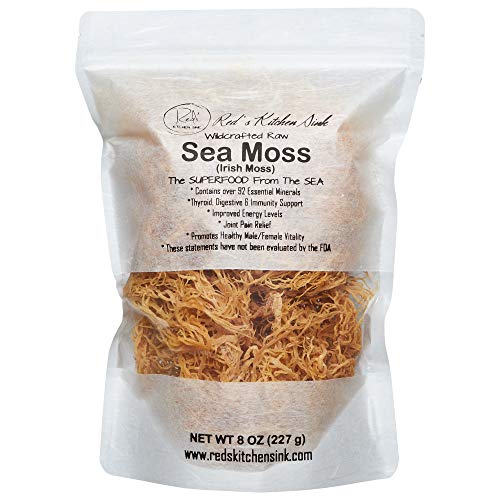 Why is Sea Moss Water Better?

The main reason behind the increased preference for sea moss water relies on its texture and taste.

The thought of scooping a spoonful of sea moss gel into your mouth each morning would have anyone scrunching their nose in distaste, and that is because of its extremely unpleasant fishy smell and taste. This is why sea moss water is such an incredible alternative; you won’t find a slimy texture in there!

Drinking sea moss water on a regular basis comes with its own benefits. Sea moss water is loaded with essential minerals that help keep the body fit and healthy.

How to Make Sea Moss Water

Making sea moss water is really quite simple. You’ll need a few ingredients to get started, along with extra elements. These give additional flavor!

To produce highly nutritious sea moss water I recommend purchasing some good quality sea moss, so that you can take advantage of it’s magical nutritious nature. You’ll also need to use some spring water or distilled water, as these contain less impurities.

Take a look at the method below:

If you like to start your mornings with a rejuvenating and power-boosting drink, then try this spice-infused sea moss juice recipe.

So Sea Moss Water or Juice?

By now you’re probably aware of the major difference between sea moss water and sea moss juice. Since the main difference relies in the flavor of the drink, perhaps you’d lean towards sea moss juice, as contains both benefits of sea moss, and additional nutrition thanks to the inclusion of fruits and veggies.

What is Sea Moss Juice Good For?

Sea moss juice is good for several things, for instance, it can help control blood sugar levels, lower cholesterol levels, and reduce your risk of chronic diseases like diabetes or heart disease.

Can You Drink Sea Moss Every Day?

Sea moss has little to no taste, which is why it is commonly consumed in juice or smoothie form. However, raw sea moss has an earthy, underwater taste that may seem familiar if you’ve ever eaten oysters.

What is Sea Moss Water Good For?

Sea moss water provides a variety of health benefits, such as increased hydration, and support for skin, nails, hair, and plants.

Can You Drink Sea Moss Water?

Refreshing sea moss water contains fresh Irish sea moss, providing you with a bunch of beneficial minerals. Sea moss water can be consumed like an ordinary bottle of water.

What is Sea Moss Water?

Sea moss is a type of sea algae that can be added to food, or consumed as a nutritional food supplement. Regular consumption of sea moss water, juice, or gel can provide your body with the vitamins and minerals it needs.

Why is Sea Moss Water Different From Sea Moss Gel?

How to Make Sea Moss Water?

To make sea moss water you’ll need some dried sea moss, a bowl, and 3 cups of spring water. Start by cleaning the sea moss under running water, ensuring that you’ve removed any dirt and debris. Place this into a bowl, and soak it in spring water for 12 hours. Strain the sea moss and drink the water!

What To Do With Sea Moss Water?

Sea moss water provides many health benefits. You can use it as a conditioner, face toner, detox for the body, or even for watering plants.

What To Do With Leftover Sea Moss Water?

Any excess sea moss water can be used to make sea moss gel or smoothies.

Consuming sea moss water can improve digestion, and increase nutrient absorption and thyroid health. Furthermore, moderately consuming sea moss can help you avoid some side effects like nausea or vomiting.