You’ll rarely find someone who doesn’t love a good pizza joint. But if you plan to take up pizza-making at home, you may wonder about using parmesan cheese on pizza. Is it a good idea? Or should you stick with traditional mozzarella? In today’s post, we are ready to take on this question, as well as answer a few other cheese-related inquiries. So, if you’re feeling ready (and hungry), let’s get into the delicious details.

Can You Use Parmesan Cheese on Pizza?

You can use parm cheese on pizza, but don’t use it the way you would soft cheeses.

Soft cheese is a cheese that has a high moisture content. Many of these cheeses, like ricotta, will be soft enough to spread. A soft cheese is usually the type of cheese you’ll want to grab when topping a pizza. As mentioned before, mozzarella definitely counts as a type of soft cheese.

Parmesan on the other hand is a hard cheese. This means that you can expect the cheese to be firm (hence the name). It’d also have a different texture. Much of the whey in this type of cheese has been drained and removed. The remaining curd is then pressed and shaped.

A hard cheese like parmesan isn’t as pliable and doesn’t melt the same way as soft cheese. It will also give off a salty and nut-like flavor that you likely won’t want encompassing the entirety of your pizza (thin crust or otherwise).

Parmesan can absolutely be used to top your pizza. As mentioned before, some even like to mix parmesan in with mozzarella as it lends itself to that nutty and delicious signature parm flavor that everyone loves. Just don’t think you can get away with topping your pizza with parm instead of mozzarella. You’ll likely kick yourself in the pants for doing so if you ever try it!

Why Do People Put Parmesan Cheese on Pizza?

Parmesan is often placed on pizza due to the flavor it adds. The nutty and saltiness of it bring to the pizza a distinct taste.

Is Parmesan Cheese Good on Pizza?

Though mozzarella is the preferred pizza cheese of choice, parmesan cheese, or even Parmigiano Reggiano, is great when you sprinkle it on as an additional topping to pizza. Its nutty and salty flavor adds another dimension to the pizza that’s much appreciated, especially within the American culture.

Remember that despite our many warnings about not eating pizza topped exclusively with parmesan, we do think that parmesan earns its place as a wonderful addition to pizza. Just look at all of the pizza parlors offering parm in small glass shakers on tables.

Why else would pizzerias offer parm this way? Because it’s delicious, that’s why!

Is Parmesan or Mozzarella Better on Pizza?

Hands down, mozzarella cheese wins out over parmesan when it comes to pizza.

Hear us out! Mozzarella cheese and parmesan cheese are very different.

Parmesan cheese is a hard cheese that is aged to produce more flavor. The longer the cheese ages, the more moisture it loses. As a result, parmesan cheese is naturally drier and will have difficulty melting in the same way that mozzarella does. Grated parmesan is even more difficult to melt.

Because of its low moisture content, parm cheese also won’t have the same consistency, texture, or flavor that mozzarella provides. 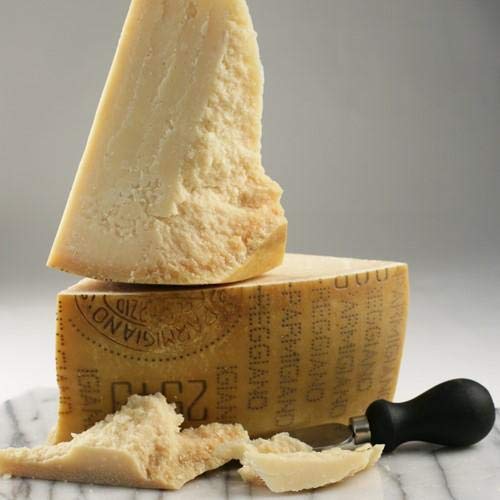 Can You Use Parmesan Cheese on Pizza Instead of Mozzarella?

This leads us to our next point.

The flavor of parmesan cheese will not be pleasing when it replaces soft cheeses like mozzarella. Therefore, we would never suggest using parmesan instead of mozzarella over the entirety of your pizza.

Instead, we suggest that you either mix your parmesan in with your mozzarella or use the parm as a topping instead. This can also keep you from using up too much of your mozzarella cheese.

Whatever you do, never cover an entire pizza in parmesan. Trust us, you won’t like the results!

Is Mozzarella Better than Parmesan on Pizza?

We think so! On the whole, mozzarella is better than parmesan on pizza. But that isn’t to say that you can’t sprinkle a little parm on top of your mozzarella! Doing so will taste wonderful.

Can You Use Grated Parmesan Cheese On Pizza?

Yes, you can use grated parm on pizza. Grated parmesan cheese is the easiest way to add this type of cheese to a pizza.

What Type of Parmesan Cheese to Put on Pizza?

You may choose to put Parmigiano Reggiano on your pizza, or you may wish to put regular sliced parmesan shavings on your pizza. Some also like to shake parmesan over their pizza. The kind parm cheese that you shake is granulated and resembles a very coarse powder. This kind of parmesan is often the least desirable as it contains chemicals. It is also nowhere near as fresh and flavorful as “real” or fresh parm cheese. 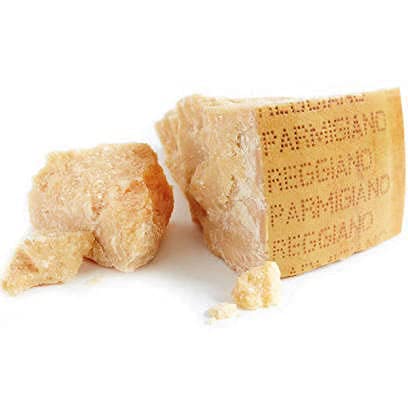 Do Italians Put Parmesan Cheese on Their Pizza?

Not really. Actually, you may find that some Italians get downright upset if you do. In some areas, adding parmesan to pizza may be considered poor etiquette. That’s because many Italian chefs prepare a dish exactly the way they feel it should be consumed.

Not only that but adding parmesan to a pizza is often viewed as an American thing. It is nowhere near as popular a practice in Italy as it is in the States.

Does Parmesan Cheese Go on Pizza?

Parmesan chees can go on a pizza, but you probably won’t find people in Italy asking for extra parm to top their already cheesed slice!

What Kind of Cheese Goes on an Authentic Pizza?

For an authentic Italian pizza, the most popular choice of pizza cheese is mozzarella made with cow’s milk or mozzarella derived from buffalo milk. Both taste excellent!

Looking for a way to incorporate parmesan into your next homemade pizza? Try this recipe and see what you think!

How to Make Parmesan Cheese Pizza

Note: Never attempt to consume raw or uncooked pizza dough! It can actually make you sick.

Parmesan Cheese on Pizza? Yes and No!

It is safe to say that parmesan used on pizza can be delightful. Still, it shouldn’t be used in the same way you would use mozzarella.

Parmesan cheese should be sprinkled or shaved onto pizza after cooking. It should not be used to completely replace mozzarella. Simply use grated parm as a garnish when cooking your fresh baked pizzas.

Get your pizza pan ready, and try cooking this dish yourself!

Is parmesan or mozzarella better on pizza?

Mozzarella is best when used over the entire surface of the pizza. It can be thought of as a cheese “base”. Layer parmesan on top of this mozzarella base. Otherwise, you may choose to leave the parmesan off of your pizza entirely. Either way, you’ll never want to use parm as a cheese base for cooking pizza.

Can I use parmesan instead of mozzarella?

No, you should not replace mozzarella with parmesan cheese. But you may mix the two for wonderful tasting pizza! Try using shaved or grated parmesan cheese, to mix it up.

Does Pizza Hut use parmesan cheese?

Some of Pizza Hut specialty pizzas may include Romano and parmesan cheese.

What can I use instead of mozzarella on pizza?

Try using Monterey jack, provolone, or ricotta instead of mozzarella on pizza. There are also other mozzarella substitutes that may be somewhat unfamiliar to you, but they work as well!

Yes! Parmesan cheese can be delicious on pepperoni pizza. The flavors will compliment each other well!

Can you mix mozzarella and parmesan on pizza?

You can absolutely mix melted mozzarella with grated parmesan cheese on pizza. The flavor will be outstanding!

“Real” authentic parmesan can melt. Cheap parm or parmesan that contains a lot of chemicals won’t be as easy to liquefy.