Oat bran is a healthful food that some people may be unfamiliar with. There are a few recipes that may require oat bran. But if you don’t have any oat bran on hand, there are a variety of oat bran substitutes you can use instead. Interested in learning more? Join us as we break down the details regarding oat bran substitutes.

What Is Oat Bran?

Oat bran is the outer layer of the oat groat, which is the kernel that is removed from the hull. Oat bran is highly nutritious as it contains more fiber than oatmeal and is known to considerably lower cholesterol and blood sugar levels.

This bran is often combined in recipes for cookies, cakes, loaves, and muffins, but also can be prepared as a stand-alone dish.

Can I Substitute Oatmeal For Oat Bran in a Recipe?

Can You Substitute Oats For Oat Bran?

Yes! Although oatmeal and oat bran are different things, you can certainly substitute oatmeal for any recipe that calls for oat bran. Do so by simply measuring your oats at a 1:1 ratio. Just be careful to use rolled oats and not instant oats, as using instant (or quick-cooking) oats may cook up too fast and change the consistency of your dish.

Is Oat Bran the Same as Rolled Oats?

No, oat bran is not the same thing as rolled oats, but rolled oats do contain oat bran.

Allow us to explain.

Rolled oats are oats that have had their husks removed and have been steamed before being rolled flat for consumption.

Oat bran is therefore simply the removed outer layer of an oat that is then separately packaged and sold. 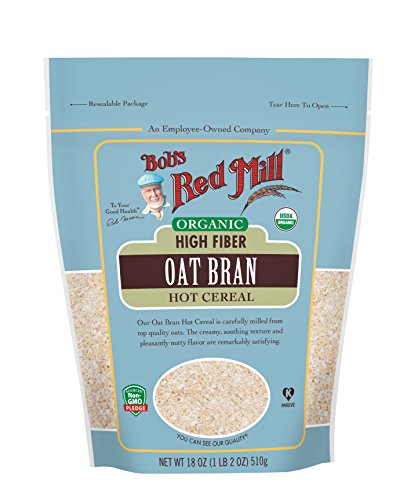 There are several substitutes that can be used instead of oat bran in baking.

The Dukan Diet is similar to the keto diet in many ways, however, they aren’t exactly the same. Like keto, the Dukan Diet places an emphasis on consuming high-protein foods and limiting excessive carbohydrate intake. However, on the Dukan Diet, Dr. Dukan recommends you consume oat bran throughout all four phases of the diet due to its fiber content and other nutritional benefits.

Unfortunately, though oat bran can be substituted most times in various recipes and other dishes, Dr. Dukan does not recommend substituting oat bran for anything else while on the Dukan Diet.

How Do You Make Oat Bran at Home?

How to Make Oat Bran

While you may not be able to separate oat bran from oats that you have at home, you can certainly purchase a package of it and whip it up as a stand-alone breakfast dish or throw it into a few of your favorite recipes for wholesome flavor and added nutrition.

To make oat bran at home, simply purchase a bag of oat bran and combine it with water, salt, and a few flavorings. For specifics, see the recipe below.

Once your water comes to a boil, carefully pour in your oat bran and stir until incorporated.

Add your salt and honey, if using.

Cook the mixture for about 5 minutes, or until it reaches the consistency you desire.

Shut off the heat.

Top with cinnamon and apples, or whatever fruit and flavor combination you prefer.

Can I Use Flour Instead of Oat Bran?

Whether or not you can use flour instead of oat bran will depend on what you are cooking.
If cooking oat bran stand-alone, then, of course, flour would not be a good substitution. However, flour may be used to replace oat bran in some cases, especially when it comes to baked goods such as cookies, muffins, breads, and cakes.
The opposite also works… therefore you can feel free to substitute oat bran for a portion–but not all of –your wheat flour for added nutrition and fiber.

Can Wheat Germ Be Substituted For Oat Bran?

In some cases, yes. Again, as long as the recipe is a baked good, a substitution of wheat germ for oat bran will likely work.

Are Oat Bran and Wheat Bran Interchangeable? Can I Substitute Oatmeal For Wheat Bran?

While wheat bran is not the same thing as oat bran, the two can be interchangeable when used in recipes. Substitute either for the other at a 1:1 ratio in pancakes, muffins, waffles, and other dishes. Just be sure to watch for allergies in people whose diet requires that they avoid wheat. Those with Celiac Disease or gluten sensitivities should not consume wheat germ.

There Are Plenty of Oat Bran Substitutes to Choose From!

There are many options for substituting oat bran, especially when using those substitutions for baked goods, pancakes, or waffles. Old-fashioned rolled oats are a fantastic replacement for oat bran, but other options include flaxseed, rice bran, wheat bran, and a variety of other replacements.