If you’re wondering, “Is sour cream gluten free?” it’s likely because you’ve decided to go on a gluten-free diet. Here at Cook’s Dream, I know how difficult a gluten-free diet can be to maintain, especially if you’re new to the scene. But don’t worry. I’ve got all the information you need to determine which types of sour creams are gluten free as well as what you should look for when determining which other condiments contain wheat gluten.

What Is Sour Cream?

First and foremost, let’s talk about what sour cream is and what it’s (usually) made of.

Sour cream (not to be confused with buttermilk) is made when cream is added to a lactic-acid-producing bacteria that yields a deliciously thick, tangy, and rich creamy substance. It is usually stark white in color and added to everything from tacos to dessert recipes.

Sour cream can easily be made at home (stay tuned for our own rendition below) but it is often sold in stores. 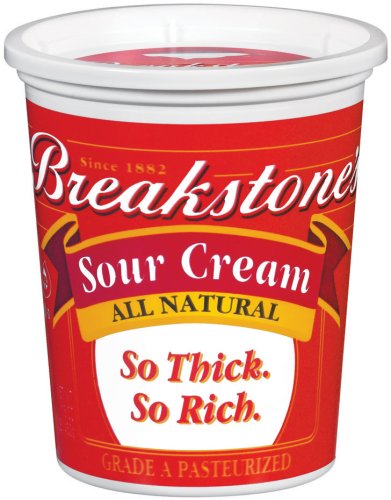 What Is Sour Cream Made of?

Pure sour cream is generally made of whole milk, an acid (lemon juice or distilled white vinegar), and cream. Just these few sour cream ingredients yield a delicious tangy flavor most of us can’t get enough of.

However, as previously mentioned, there are many types of sour cream sold in supermarkets. Though pure sour cream can easily be categorized along with other gluten free foods, it can sometimes contain hidden gluten, depending on the sour cream brand.

To be sure, aside from routinely checking the expiration date, you should also always check the label to ensure gluten free sour cream safe eating. Although those that avoid gluten don’t have much to fear in terms of eating sour cream, it really is best practice to check the label on all sour cream brands to be sure.

What Brand of Sour Cream Is Gluten-Free?

There are many brands of sour cream that are gluten free. Before we list some of the more popular ones, I want you to be aware that just because an original sour cream label does not contain the phrase “gluten free” doesn’t mean it isn’t. In fact, most sour cream brands won’t mention that they’re gluten free because it is already assumed.

Still, there are some brands that have gone to great lengths to ensure that they know that their sour cream products are indeed conducive for a gluten free environment. With that said, the following are some of the most popular sour creams out there that are suitable for gluten allergies and other gluten intolerances.

What Brands of Sour Cream Are Gluten-Free?

As promised, I have compiled a list of some of the most popular types and brands of sour cream out there to determine if they are gluten free. These include:

Yes, Daisy brand sour cream is gluten free. And though this isn’t always advertised on the label, you can be sure that Daisy is indeed gluten free.

According to Walmart, Great Value full fat sour cream is gluten free which means it can easily become a part of a gluten free healthy diet. Cheers!

When glancing over Chipotle’s allergen menu, it seems that sour cream is listed only as a dairy product, and not as a gluten containing product. Thus, we affirm that Chipotle sour cream is gluten free!

If you suffer from Celiac disease, it’s understandable that you may wonder if Kroger brand sour cream is gluten free. The verdict? It is! Kroger sour cream can be safely eaten even by those with severe allergies related to gluten.

Yes, Knudsen sour cream is gluten free. There are no gluten ingredients that we can see on its ingredients list.

Despite being a dairy free sour cream alternative, you can expect that Forager sour cream is fit for a gluten free diet. It even contains live active cultures!

Is All Sour Cream Gluten Free?

When it comes to actual sour cream, you’ll likely be hard-pressed to find any sour cream out there that contains gluten. This is because sour cream is naturally made from ingredients that don’t involve gluten. Nevertheless, it is always a great idea to check the label. Some cheaper brands may sneak a bit of gluten in the mix to help thicken the mixture. But honestly, this rarely ever happens.

With that being said, it is important to note that if you find food that says it contains sour cream (such as sour cream and onion chips) you really shouldn’t assume the chips are gluten free. The sour cream is likely there to help achieve a sour flavor, but because it isn’t the only ingredient present in the chips, you may find gluten hidden in the mix.

This is true of any food you find that contains sour cream. Check the details on the label to be sure.

Where Can You Find Gluten-Free Sour Cream?

To get specific, try your local market or supermarket. Stores like Walmart, Kroger, and even Target often carry sour cream. You can even find dairy free sour cream in some cases if you are avoiding both dairy and gluten.

Why Is Sour Cream Not Gluten-Free?

Remember that most sour cream is indeed gluten free. The reason we say “most” is that you can never be certain that one or two companies won’t try to sneak a bit of gluten in the mix for their own reasons. However, in almost every case you’ll find sour cream to be gluten free.

Just remember that if your sour cream is combined with something else or is a part of many ingredients within a certain food product that you’ll need to check the label closely to ensure that no gluten is present.

If you’re still a bit worried about sour cream from the store containing gluten, then you may consider making it at home instead. Gluten free foods can be hard to come by, and those with Celiac Disease have a right to be extra vigilant about what they put in their bodies.

Rather than obsessively checking overall sour cream brands, I recommend just whipping up a batch of it at home. It’s easy! Just follow the simple steps below to get that much closer to delicious sour cream right from the comfort of your own home!

In a mason jar, mix your heavy whipping cream in with your acid (lemon juice peer vinegar). Afterwards, pour in your milk.

Once you’ve poured in the milk, tightly secure the lid on your mason jar. Shake the jar vigorously for 10-20 seconds.

After shaking the mixture, remove the lid. Take a clean piece of paper towel and place it over the lid. Using a rubber band, secure the paper towel to the glass jar.

Allow the sour cream to set on the counter overnight.

After 24 hours of sitting there, you’ll likely notice your sour cream has firmed up. Stir it once more and place back on its regular lid.

Keep it in the refrigerator for up to 2 weeks.

Note: Homemade sour cream may be a bit thinner than your store-bought version. This is totally normal! It can also help when using in dessert recipes as it isn’t quite as thick.

Yes, in most cases sour cream is gluten free. The ingredients usually include regular or cultured cream and can contain a variety of ingredients. Whether you’re eating plain sour cream or even Mexican style sour cream, be sure to check the ingredients so that there aren’t any surprises.

Not into checking labels? Just whip up your own at home! Use our recipe detailed above to have your own gluten free sour cream on deck for whenever you need it!

Hope this helps answer the question, “Is sour cream gluten free?” See you next time!

Yes. According to Lay’s, the sour cream and onion chips are gluten free.

Yes. There are no gluten containing ingredients in Ruffles Cheddar and Sour Cream chips.

In most cases, sour cream is not dairy free. Still, there are some versions out there that are both dairy and gluten free! However, this isn’t usually the case.