If a tomato is a fruit, then ketchup is, in essence, a fruit smoothie. Right? Well, not exactly. In this post, we’ll be doing a deep dive into the question, “Is ketchup a smoothie?” as well as provide our outlook on why ketchup can not literally be considered a smoothie.

Is Ketchup Technically a Smoothie?

No, ketchup is not technically a smoothie.

This fun question is often posed by people who have recently learned that tomatoes are fruits. It is an intriguing inquiry for sure.

However, we can attest that there are many reasons why ketchup would not be considered a smoothie.

Reasons Why Ketchup Is a Smoothie

Before delving into the many reasons why ketchup should not be considered a smoothie, it may be good to pause and reflect on the similarities between fruit smoothies and ketchup that might drive a person to ask this question in the first place.

Fruit smoothies and ketchup would both be considered liquids.

Though they aren’t the same consistency, both flow freely and take on the shape of their container. Therefore, the two entities, though different, would both be classified as liquid substances.

Both Contain a Variety of Ingredients

As mentioned before, both smoothies and ketchup technically contain fruit.

A fruit is defined as the “fleshy or dry ripened ovary of a flowering plant, enclosing the seed or seeds”. Thus, a tomato would be defined as a fruit, though it is often used and thought of as a vegetable.

Most smoothies contain traditional fruits, especially those like bananas, berries, and yes, even a very ripe avocado blended with milk, sugar, or honey. Ketchup contains tomato fruit, mixed with other ingredients like vinegar and spices. Thus, the two are similar in that they both contain fruit and are combined with other ingredients.

Why Is Ketchup Not a Smoothie?

Now that you know some of the arguments posed as to why ketchup should be considered a smoothie, it is time to offer the facts about what sets these two food items apart.

Of course, both smoothies and ketchup do share some similarities. But what they don’t have in common makes all the difference in the world!

Definition of the Word “Smoothie”

Truth be told, tomatoes blended with milk, yogurt, or ice cream may actually turn into something delicious. But that deliciousness won’t be the ketchup we all know and love!

Another big difference between ketchup and a smoothie is that ketchup is generally savory. It only has a hint of sweetness, while a smoothie is undeniably sweet.

While ketchup does – typically – contain a reasonable amount of sugar, it also provides a tangy, umami flavor that pairs well with hamburgers, fries, and other foods. The vinegar, sugar (sometimes high fructose corn syrup), and spices are what give ketchup the tangy flavor that earns its keep as one of the most popular condiments in America. 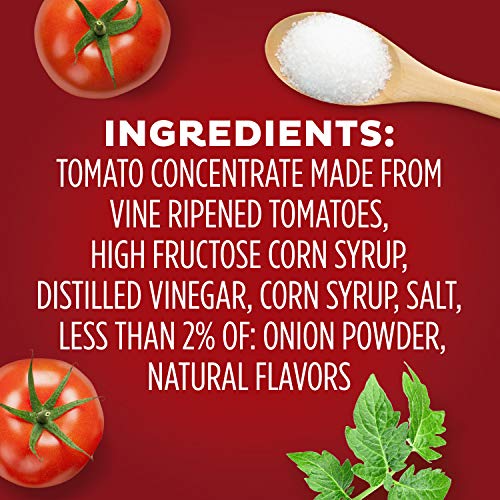 Still, ketchup isn’t nearly as sweet and rich as your traditional smoothie. As mentioned earlier, a smoothie will contain fruit and yogurt, ice cream, or milk. The result, as you might imagine, will be a thick, creamy, and luscious drink that you can enjoy as a guilt-free dessert or even as a meal replacement, in some cases.

Ketchup, by nature, is a condiment and not a drink.

Condiments pair with other foods to amplify their flavor. Drinks aren’t designed this way.

So, to prevent further insulting your intelligence – we’ll just leave it at that!

Another striking difference between ketchup and a smoothie drink is that ketchup is usually cooked, while smoothies are blended.

Most ketchup recipes call for vinegar, spices, and tomatoes to be combined in a pot and cooked, sometimes for up to 10-12 hours depending on the cooking method. Thankfully, there are also recipes that can be whipped up in as little as 20 minutes. In either case, smoothies are never cooked, but instead are blended and enjoyed cold.

Ketchup Can Be Served at Virtually Any Temperature

And that brings us to our final point.

Is Ketchup a Smoothie or a Puree?

Do you want an honest answer to this question? Neither!

Ketchup is neither a smoothie nor a tomato puree. Technically, a tomato puree is tomatoes that have been cooked and strained to formulate a very thick liquid. Though ketchup does consist of cooked tomatoes, it also includes other ingredients, like vinegar and sugar that make it much different than your standard tomato puree.

So, while ketchup is more similar to a puree than it is a smoothie, ketchup should still never be referred to as tomato puree.

With all of this talk about ketchup, tomatoes, and smoothies, you may be wondering if there is a such thing as a tomato smoothie at all. Why yes, actually, there is!

Tomato smoothies are possible to make though they are a bit unconventional. Still, if you have the right things on hand, you may be surprised at how nicely your smoothie comes together. Try it and see what you think!

How to Make Tomato Smoothie

Chop the tomatoes into quarters and place them in a blender.

Squeeze a bit of lemon juice in (or leave it out).

Add to the blender the sugar and the ice.

Note: If you wish, you may withhold the ice, and blend your smoothie without it. Once blended, try pouring your smoothie over the ice for a different effect. Both ways are (surprisingly) delicious!

Is Ketchup Considered a Smoothie? Eh, Not Really…

So, is ketchup considered a smoothie? The honest answer to this is no. Because ketchup is savory, acts as a condiment, contains spices and vinegar, and is cooked rather than blended with milk, yogurt, or ice cream, we can confidently say that ketchup is not a smoothie.

As Brian Driscoll puts it, “Knowledge is knowing that a tomato is a fruit. Wisdom is knowing not to put it in a fruit salad.”

Ketchup isn’t traditionally blended, but you can totally make ketchup in a blender if you want to. To do so, we recommend you follow the directions for a blender ketchup recipe.

Ketchup is not really tomato puree. Tomato puree is typically cooked tomatoes that eventually turn into a thick liquid. Ketchup is made using a similar technique, but has many ingredients added to the tomatoes that put ketchup in a class of its own.

If tomato is a fruit, is ketchup a smoothie?

The answer to this is no. Just because tomato is a fruit, it doesn’t mean that ketchup is a smoothie. Smoothies contain milk, ice cream, and yogurt. It is also sweet and not savory. Ketchup is tangy and is used as a condiment on many foods. Thus, the two are not the same!