When Water Freezes into Ice, How Long Does it Take?

There are many factors that need to be considered when looking at the speed at which water freezes.

Before that, let us rewind back to elementary school science for a moment to remind ourselves of the science behind the changing of states.

The Science Behind Water Freezing

The freezing point of water is 0 degrees Celsius, or 32 degrees Fahrenheit. Going back to the physics we all learned in school, let’s remind ourselves of the process. The freezing process is similar to that of the boiling process (but of course, the opposite).

Water, like any other liquid, can be seen as constantly moving molecules, which gives it its fluid state. The heating process occurs when energy is applied to the molecules causing them to speed up and travel much quicker. The same is true for the opposite, When the temperature drops, they begin to move slower.

So, when these molecules start to slow down, they become sluggish and begin to hook together, which results in the water to start solidifying into a solid crystal. Thanks to its crystalline solid state, water (unlike many other liquids) expands in its solid state, causing it to be denser than when it was a liquid.

What is the Temperature at Which Water Freezes?

While the freezing point of water is 32 degrees Fahrenheit, there are a few different factors that come into play.

Why does it take water so long to freeze?

There are a few different factors which come into play when trying to freeze it, which I will cover in this next section:

The Volume of Water Available

The less water that is present, the quicker the water will freeze. When there is a lower volume, there is a lower mass: this then means that less energy is required to bring down the temperature of the interior molecules, which are not touching the surface. This then results in a faster freezing period.

The Temperature of the Water

The Thickness of the Water

How does Altitude Affect Water Freezing?

However, even if you’re on Mount Everest this would only lower the freezing point by 1.8 degrees Fahrenheit. This is due to low atmospheric pressure at high altitudes.

How Long Does a Typical Ice Cube Tray Filled with Water in a Standard Freezer Take to Freeze?

While water freezes at 0 degrees Celcius, or 32 degrees Fahrenheit, the actual time it takes to freeze will be determined by a number of other factors which come into play and may cause your freezer to take longer or shorter.

Again, referring to the volume of water you’re trying to freeze, a smaller container will take a shorter time to freeze.

So, if you have small ice cubes, then they will be ready quicker. Larger ice cubes for cocktails such as negronis or an old-fashioned take more time.

The design of the ice tray also plays a role in how long it will take to freeze. Some ice trays have dividers between each of the tapered cubes, while others have air spaces between the empty cubes.

The temperature in the freezer

Another factor that needs to be considered is the temperature of the freezer.

The average temperature for home freezers is usually 18 degrees Fahrenheit. This will fluctuate depending on a few different factors, such as opening the door of the freezer often, loading it with room temperature foods, or even warm foods.

If you are trying to make ice cubes quickly, try your best to leave the freezer food closed as much as possible.

Countertop ice makers work similarly to commercial ice machines, they are just smaller and for use at home. These machines have the ability to freeze water much faster than standard refrigerator-freezers.

These can make ice in as little as a couple of hours.

On the inside of the ice maker, there is a metal tray which is connected to a compressor coil. The refrigerant is then pumped by the compressor, which is then fed through the metal coils, allowing the metal trays to freeze. This is called direct freezing, which is the same type of freezing that is used in large ice makers.

Unlike the way you usually fill the tray with water, the dedicated ice maker sprays water onto the tray. The tray is already at freezing temperature, therefor the water settles on the tray and almost instantly ice crystals begin to form. This allows the water to freeze much faster than in your freezer, which can take hours to do the same job.

Whats more, an ice machine with this function can produce ice cubes that look perfectly clear because there are no imperfections in the ice. This can happen because it is frozen equally from the inside out. This makes them ideal for cocktails and impressive cold drinks.

This compares to standard freezers, which usually produce ice cubes that have an unappealing white cloud in the center of the cube. 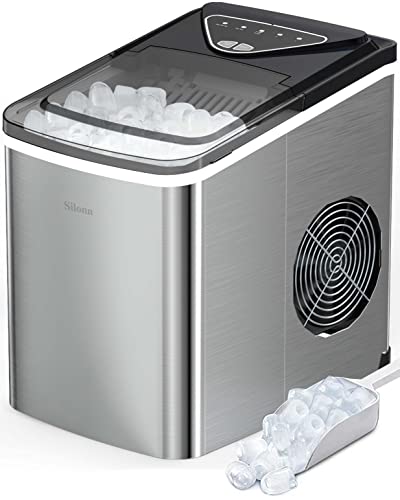 In a Standard Freezer, How Long Will a Bottle of Water Take to Freeze?

A standard 16 oz. plastic bottle of water which is at room temperature will usually take 90 minutes to freeze in your standard freezer.

This of course is dependent on the size of the bottle, but smaller bottles of water will freeze quicker than larger bottles.

For example, a water bottle that is 8 oz. will take approximately 45 minutes to freeze in a regular home freezer, whereas water in a 1-liter plastic bottle will probably take around 2 hours to freeze.

How Long Does it Take to Freeze a Gallon of Water

Its going to take a long time to freeze a gallon of water, particularly depending on the container you’re storing it in.

It will most likely freeze if kept overnight in a powerful freezer.

It is important to consider other factors previously mentioned as well if planning to freeze this amount of water.

How Long Does it Take for Water Pipes to Freeze

Pipes will need a sustained period of time to freeze through. For example overnight if the temperatures have dropped below 32 degrees Fahrenheit and your pipes are unprotected. It could take 6-8 hours for your pipes to freeze.

Saying that, as a general rule, the ‘temperature alert threshold’ for freezing pipes is roughly around 20 degrees Fahrenheit.

How Long Does it Take Room Temperature Water To Freeze

For water that is at room temperature, it will take roughly 1-2 hours for a freezer to cool this water to freezing. It must be taken into consideration that the vessel will play a role in the speed of freezing too.

This will determine the volume of water that is present and the surface area of which the water has, which directly affects the speed of the freezing process.

Speeding up the freezing process

Found yourself with no ice at home and need it quickly, say you’re hosting a party or its a hot day. You can speed up the freezing process, even if it takes an average of 3-4 hours for the water to freeze by following a few of these steps:

Chill the Ice Cube Trays Before Using Them

Use Water That Has Been Bottled or Distilled

Using a cookie sheet or cupcake baking tray means that the surface area of the water has been largely increased in comparison to that of a plastic water bottle.

Better yet, use one that is metal!

If you have a cookie sheet or cupcake tray that is metal this will work even better due to the conductive properties of metal.

You could even use a flat metal tray to freeze the water as this would again hugely increase the surface area of the water, which we now know plays a hugely important role in the speed of freezing water.

The conductive properties of metal will allow the metal tray to cool down much quicker than that of plastic and help the water to freeze faster. Think of tongues sticking to metal poles in freezing temperatures – its a good example of how much metal holds this energy within itself.

You’ll notice when removing the tray from the freezer that you might need a tea towel to protect your hand! You could just use a rolling pin or the back of a wooden spoon to smash up the ice on the tray. And voila, you’ll have perfectly good ice, quick time.

Boil the water before freezing

How long does it take for boiling water to freeze? The answer will surprise you! It is a scientific fact that boiling water before freezing will actually cause the freezing process to speed up. It is known as the Mpemba Effect.

This is because hot water cools faster because of the bigger difference in temperature between the water and the freezer. This helps it reach its freezing point before cold water reaches its natural freezing point.

Where a freezing point would also usually be governed by impurities, boiled water has had these bacteria, dust, and dissolved salts removed. This ensures that the freezing point remains that of the actual water.

In order to do so more quickly, just follow these simple steps:

Below is an easy-to-follow video that explains this concept!

How fast does water freeze at -10 degrees Celsius?

How can I make clear ice at home?

Another way you can manually make your ice cubes clear at home is by boiling the water initially. This will remove any impurities from the water, and once it has frozen over, will result in perfectly clear ice cubes, great for fancy cocktails!

I hope this has answered your questions on how the different factors affect the freezing time of water. The most important ones are temperature, the surface area of your container, and the purity of the water.

If you were interested by this topic and would like to check out some other similar blog posts that I have written, just follow the links below!

If you have anything else to add, please let me know in the comments!