Cooking with frozen bacon in the air fryer is hands down one of the quickest and easiest ways to get that perfect crisp on your bacon. However, it can understandably seem daunting if you’re not used to using air fryers – but we’re here to fix that today. So, let’s get started and learn all there is to know about air frying bacon from frozen!

Can I Cook Bacon In The Air Fryer?

Well, the truth is that cooking bacon in the air fryer does come with it’s downsides.

Will Bacon Ruin An Air Fryer?

Why does this need to be done though? Let’s get into it!

Why You Should Never Cook Bacon In Your Air Fryer – Debunked

Many argue that bacon shouldn’t be cooked in the air fryer as the fat will render off completely, potentially causing problems for your fryer and making the bacon too crisp.

The former is due to the fact that the fat from your bacon may smoke, and if left uncleaned can build up, burn, and stick to your fryer after use while dirty. This ultimately will end up scratching up and ruining the inside of your air fryer, so it’s best to fry bacon before you have an air fryer deep clean scheduled.

The latter is just a matter of personal taste. I, like many others, don’t like it when the fat of the bacon is chewy. Therefore I prefer rendering it away altogether. However, this isn’t the case for everyone – some may find air fryer bacon to be too dry or crisp. If you want to avoid getting it to that point, I would recommend cooking it for a little less.

Depending on the temperature you cook your bacon at and the make of your air fryer, your fryer may start to smoke.

Remedy this by turning down the temperature and cooking your bacon for longer.

The reason behind the smoking is due to the fat of the bacon rendering – at a certain point, the fat starts to burn and melt rather than evaporate. If this is happening, it means the heat is too high.

What You Should Know Before Cooking Bacon In The Air Fryer

Can I Put A Whole Pack Of Bacon In An Air Fryer?

The answer to this question depends on two things – the size of your air fryer basket, and the amount of bacon the pack contains.

Usually, you don’t want things overlapping *too* much in the air fryer, so it’s a good idea to look out for this.

Do You Have To Flip Bacon In Air Fryer?

You should flip bacon when cooking it in the air fryer. This ensures that your bacon is evenly cooked on both sides, and lowers your chance of undercooking the bacon.

How Do You Keep Bacon From Curling In An Air Fryer?

There really is no way to keep bacon from curling, especially in the air fryer.

If you were to cook bacon in a pan or on a griddle, you could use a steak press to keep the bacon flat.

However, as far as I’m aware, it’s not possible to do this in an air fryer. 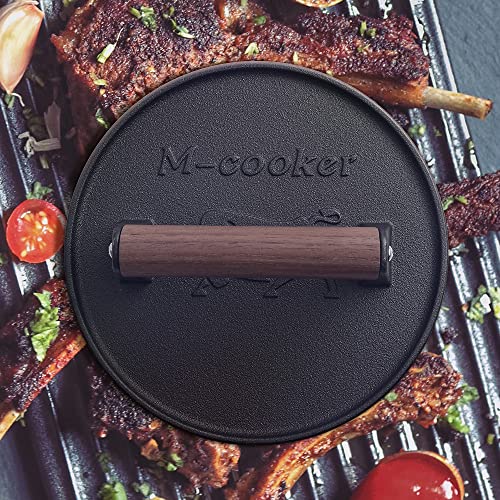 Cooking bacon in an air fryer is no different from cooking it in a pan. Both will end up rendering in their own fat, so there is no nutritional difference unless you add oil to one and not the other.

How Long Do You Do Bacon In Air Fryer?

Most regular or ’thin’ bacon slices will be done in around 8 minutes, but thicker bacon may take longer. The same goes if you’re frying a lot of slices – thing’s might be a little slower.

For thick bacon in air fryer, cook for up to 15 minutes.

How Long To Cook Frozen Bacon In Air Fryer

Frozen bacon takes just slightly longer to cook than fresh bacon as it needs an extra minute or two to defrost. You can generally expect frozen bacon to take around ten minutes to cook.

How Do You Clean An Air Fryer After Cooking Bacon?

In my article about putting water in an air fryer, there’s a great video on deep cleaning and how to deep clean your air fryer, showcasing multiple methods.

However, if you just want to do a simple maintenance clean, here’s a thorough video on cleaning your air fryer.

How To Make Frozen Bacon In The Air Fryer

What You Will Need

This perfectly crispy bacon would fit wonderfully well with my air fryer breakfast sandwich recipe. Even add in some frozen dino nuggets for the kids!

Alternatively, use it as a chance to freshen up some leftover pizza, reheating that in the air fryer too! If you make the bacon extra crispy, try using it in the recommended servings for air fryer kielbasa hot dogs.

The possibilities are endless!

Can I Cook Bacon In The Air Fryer?

Yes, just remember to monitor the cooking (in case it becomes over or undercooked). And clean your air fryer after use.

Without additional oil in pan frying, air fryer and pan fried bacon is nutritionally the same.

Air Frying Bacon – Is It Worth It?

While I’ve already covered whether it’s actually even possible to air fry bacon, I haven’t yet explored whether this option is worth the work it might give you.

The pros are that its quick, easy, and gives you some ultra-crispy bacon. The cons? Not everyone is a fan of that kind of bacon. Aaaand your kitchen *might* get a little smokey on the first try, with some extra clean up required to keep your fryer in shape.

If that all sounds doable for you, then air frying bacon is absolutely worth it!