If you’re an avid bagel lover, you may have already heard of egg bagels. But what sets an egg bagel apart from a traditional one? Aside from the addition of eggs, there are a few other key differences between these two delicious bagel treats. So, what exactly are those differences? Read on to learn all about egg bagels and how they fare against their traditional plain bagel counterpart.

What is an Egg Bagel?

What Is In an Egg Bagel?

An egg bagel is made with all of the ingredients a regular bagel has except with the addition of an egg.

The egg provides not only a yellow color, but also a richer taste, less chewy, and more fluffy texture.

Egg bagels are known to be richer in flavor than regular bagels, mostly because of the addition of eggs to the mixture.

Aside from that, some egg bagels are also said to be a little sweeter, although that is up for debate and likely depends on the recipe used and who bakes it.

One thing that’s for sure when it comes to the difference between an egg bagel and a regular bagel is that egg bagels are a lot more airy and fluffy than their traditional chewy counterparts. For some, this is a welcome change, but for others, it may lead to disappointment.

The best way to figure out which bagel is best for you is to eventually try an egg bagel for yourself…we’re willing to bet you’ll be happy you did!

What Is the Difference Between a Plain Bagel and an Egg Bagel?

What Makes an Egg Bagel Different?

The main difference between a traditional (or plain) bagel and an egg bagel is the addition of an egg. And because of the egg, an egg bagel is going to be fluffier and lighter in texture without the signature “chew” that traditional bagels typically provide.

In addition, egg bagels usually have a yellow tint to them and a richer flavor thanks to the addition of the egg. However, some egg bagels have yellow coloring added to them to boost their visual appeal.

(If you want to know about more egg recipes, check out our post on egg and flour dishes!)

Here are the main differences between an egg bagel vs plain bagel:

Why Don’t They Make Egg Bagels Anymore? What Happened to Egg Bagels?

Egg bagels can actually still be found in a variety of places.

However, many egg bagels seem to have disappeared around the time that COVID-19 hit in 2020. 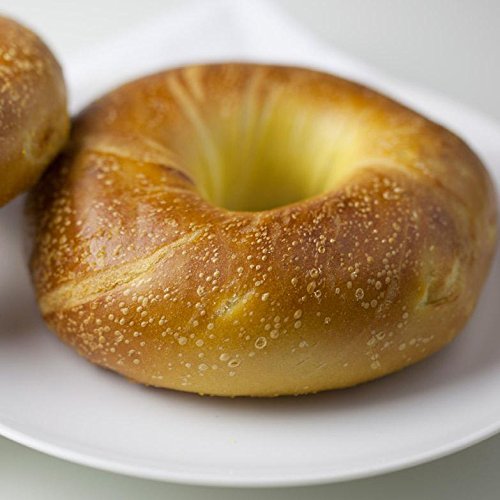 Because COVID-19 was so prevalent many food trucks vanished from the streets. Many egg bagels that were being sold were sold from these entities, and when they left, so did egg bagels.

Or so it seems.

Still, many egg bagels were also sold in brick-and-mortar stores and some trendy bakeries and cafes in certain cities still carry them.

Thankfully, even if you can’t find your beloved egg bagels on your block you can take comfort in knowing that you can easily make them at home by following the simple recipe we’ve linked below!

Egg bagel sandwiches are delicious and can be created by topping an egg bagel with a multitude of ingredients to form a satisfying meal that can be enjoyed for breakfast, lunch, or dinner.

Here are a few simple ideas to whet your appetite:

Interested in knowing how to make an egg bagel that’s all your own at home? Check out the following recipe for fluffy egg bagels!

How to Make an Egg Bagel

Aside from being high carb and fairly high calorie, bagels that are made from whole grains may be considered healthy, when consumed in moderation.

Whole grains have several benefits for the health including:

Egg Bagel Calories: How Many Calories in an Egg Bagel?

The amount of calories in an egg bagel typically runs between 250-300 calories. Depending on how you top your egg bagel, you may be looking at a sandwich that runs 400-500 calories or more.

Therefore, you’ll want to watch how often you eat egg bagels if you are trying to lose weight, especially if you are eating multiple egg bagels per day.

Why Are Egg Bagels So Yellow?

Egg bagels aren’t specific to New York, per se, but they are an “American thing”, meaning they originated in America as the American population demanded a less crusty version of the traditional, and still well-loved, plain bagel.
Today, egg bagels can be found all around the United States and even in countries abroad, although their mass appeal and popularity has waned a bit in the U.S. compared to its earlier more prominent years.

Egg Bagel vs Plain Bagel: The Same Yet Different!

We hope you’ll give an egg bagel at least one try at some point in your life; if you’re an avid bagel lover you’ll likely love this interesting twist on the old classic!

More posts for you: