You’re off work, very hungry, and want to eat as soon as possible. If you’ve got leftovers in a carton box at home, you may find yourself asking, “can you put cardboard in the oven?” Well, not unless you’re willing to take the risk! In this article, we’ll detail what may happen if you put cardboard in the oven. We will also provide you with alternatives that can keep you, your food, and your family, a lot safer.

At What Temperature Does Cardboard Catch Fire?

Before delving into whether or not cardboard can catch fire, it may be helpful to know under what conditions cardboard burns.

Sources differ as to what temperature cardboard actually burns, but most seem to suggest that it happens at a little over 400 ºF.

Cardboard is a material made of cellulose fibers and is often used to make boxes. It is very similar to paper in that cellulose is often composed of wood pulp, though cardboard is much sturdier.

Cardboard has many useful functions and can be recycled in most cases. But is it suitable for heating in the oven? We think not!

Why Do People Place Cardboard in the Oven?

One scenario in which you’ll often find people putting cardboard in the oven is when reheating food. Because many takeout restaurants utilize cardboard boxes, some individuals think it is safe to place them directly in the oven. But, as you’ll see soon, this simply isn’t true. By baking a cardboard box of any sort, you’re taking a real risk.

None of these are oven safe. Therefore, we don’t recommend you take the risk!

Can You Put a Cardboard Box in the Oven?

The inks, dyes, and linings that often accompany cardboard boxes can make their way into your food while you’re heating the box. You risk inhaling fumes and consuming toxins that were never meant to enter your body when you put cardboard in the oven.

Therefore, it is best that you skip placing cardboard in an oven. It is best to use an alternative instead.

Can You Put Cardboard in an Electric Oven?

Cardboard placed in an electric oven can ignite. This puts you, and those around you, at risk.

Yes, cardboard technically ignites at above 400 ºF. But don’t think you can put cardboard in the oven below that temperature.

Cardboard often contains more than simply cellulose. It can also contain inks, dyes, paper lining, and plastic lining, all of which have different combustive properties.

Can You Put Cardboard in the Oven on Warm?

Since cardboard doesn’t – typically – burn at under 400 ºF, you may wonder, “Can you put cardboard in the oven on warm?” The answer? Again, we wouldn’t recommend it.

Remember that there are often other elements lurking in your cardboard box that, when heated, can produce fumes and toxins.

Honestly, it only takes a few minutes to transfer your food to an oven-safe element. Please do that instead of risking harm to yourself and others.

Can You Bake Pizza on Cardboard?

No, you shouldn’t bake pizza on cardboard.

People often bake pizza on cardboard by accident, or under the false impression that they should. This often happens when a person purchases a frozen pizza. Upon opening the pizza, the person may be confused as to whether the cardboard round beneath it should stay or go. Sometimes people even forget that the cardboard is there to begin with. Don’t worry, we’re guilty of this, too!

Can You Put the Cardboard From a Pizza in the Oven?

Despite innocent beliefs and honest mistakes, it is very important that you avoid them. Actually, baking a pizza on cardboard can be quite dangerous, especially because most frozen pizzas require that you bake them at 400 ºF or greater for best results.

What’s even scarier is that many fresh baked pizzas, such as those made from scratch, can require oven heat as high as 500 ºF. You’re asking for trouble if you place cardboard in an oven at this temperature!

Note: Don’t attempt to try to microwave cardboard either. Though you may get away with it sometimes, the truth is that doing so is very risky!

Can You Put Cardboard Pizza Box in the Oven?

Another mistake people often make is attempting to place an entire pizza box in the oven.

If you don’t have a round pizza pan, placing the entire box in the oven may sound very tempting. After all, what else could you place a large pizza on, right?

Wrong. Though the question, “Can you put a pizza in the oven with cardboard?” is a common one, it’s almost never safe to do. You risk igniting the box and you also risk contaminating your food.

Alternatives to Putting Cardboard in the Oven

Putting cardboard in the oven may not be a good idea, but you’ve got options when it comes to heating your food. There are several safe ways to get your food nice and warm without having to worry about a fire erupting in the process.

Check out the following ways to–safely–heat your food in the oven:

An easy way to reheat food items in the oven is to simply wrap them in foil. This will work particularly well for clunky and solid foods, like pizza and burgers. Simply wrap your selected food item in the foil and place it carefully in the oven. Be sure that the food is facing seam-side up in the oven, as putting the seam of the foil down will allow the food and juices to escape. If you’re dealing with a large pizza, split the pizza into one or two slices and wrap them individually. If you are heating something separable like noodles or mashed sweet potatoes, we don’t recommend using the oven at all. 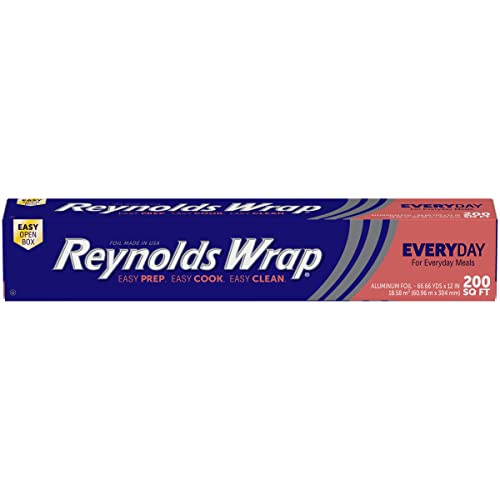 Use a Baking Sheet

A baking sheet can be your best friend when it comes to heating food. Simply place your food on a lined oven-safe tray and preheat your oven. Pop it in and you’re ready to go!

Some jeer at using a baking sheet when making pizza because it may lead to less crispy crust results. If you’re looking for a dynamite crispy pizza crust, consider placing your pizza directly on the oven rack. But be careful. Only do this with frozen pizza or pizza that’s already been cooked. If you put raw pizza dough directly on wire oven racks, it’ll only fall through and cause another fire hazard.

Be aware that even placing a frozen or previously cooked pizza directly on oven racks can present risks. As toppings, cheese, sauce, oils, and breadcrumbs come into contact with heating elements, flames may spark. However, if a super crispy crust is what you wish to achieve, this might be your best bet.

As always, proceed with caution!

Note: If you’re worried about your food drying out, try wrapping it in foil before placing it on the baking sheet. 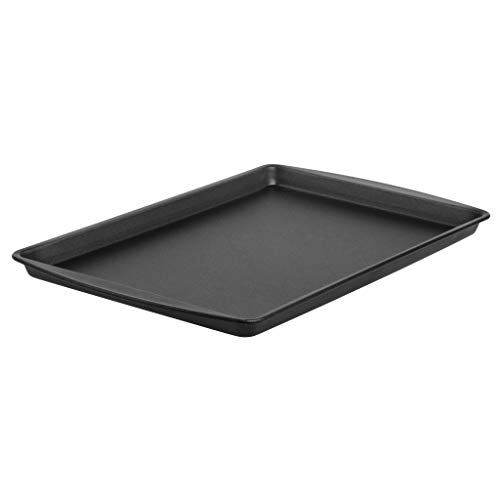 A Glass Dish (May) Do

You know those glass baking dishes you’ve got stashed in your cabinet? You can use those to reheat your food under certain pretenses.

Just like glass in the microwave, most glass can go in the oven at lower temperatures. Never attempt to use glass in a very hot oven, such as over 425 ºF. Doing so may cause the glass to shatter. 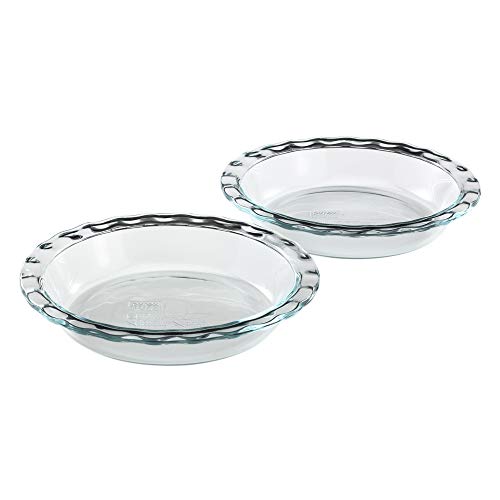 If you regularly reheat food like pizza, it may be worth it to invest in a pizza stone or pizza pan. These circular-shaped kitchen gems are worth their weight in gold if you’re an avid pizza fan. They can get your crust nice and crispy with little to no effort.

Check them out and see what you think! 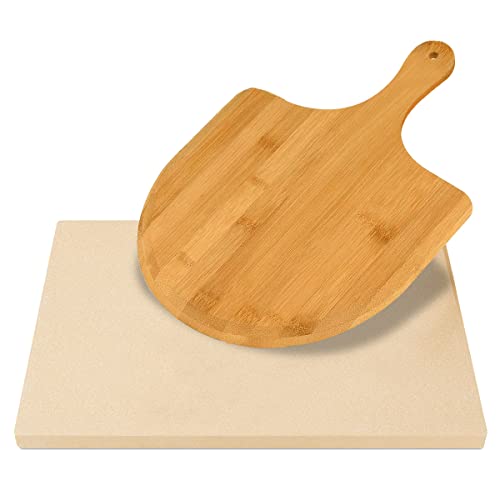 Sometimes, certain foods that come in a cardboard box will come with specific instructions. Sometimes those instructions will actually tell you to place a tray that may look like cardboard in the oven along with your food. That’s likely because whatever round or tray they provide you with has been deemed oven-safe.

Again, you should only do this if you are instructed to. Also, be sure to only do so at the recommended temperature.

Can You Put Cardboard in the Oven? We Don’t Recommend It…

While cardboard may not technically be flammable until it reaches a temperature of over 400 ºF, we don’t recommend placing it in the oven. There are toxins and fumes that can be released from certain types of cardboard boxes that can end up in your food when you heat them. Not only this, but a cardboard box that catches on fire in your home could lead to devastating results.

Rather than take the risk, we recommend that you use another method to heat your food. Tin foil, baking sheets, glass bakeware, and pizza pans are all great options.

Can you put cardboard in the toaster oven?

We do not recommend putting cardboard in a toaster oven.

Can you put paper in the oven?

Never put paper in the oven unless it is oven safe. For example, parchment paper is perfectly safe to use in the oven because it is designed for this purpose. Other types of paper, like paper towels, should not be placed in the oven, and should even be used in microwaves with caution.

Can you put cardboard wrapped in foil in the oven?

Never put cardboard in the oven, even if it is wrapped in foil.