A dutch oven is a classic piece of cookware that offers much in the way of versatility. So, can a dutch oven go in the oven? This is a seemingly simple question. But there are many facets to the answer.

In this post, we’ll answer the question of whether or not a dutch oven can go in the oven. We’ll also tackle other frequently asked inquiries involving the proper use of this timeless cookware classic.

Can I Put My Enamel Dutch Oven in the Oven?

Yes, you can put an enamel dutch oven in the oven.

When doing so, however, be sure to read the manufacturer’s instructions. Sometimes, an enamel dutch oven may have temperature requirements. This is usually due to the lid of the dutch oven as well as the handles. Oftentimes, these elements that come with your dutch oven aren’t always safe at high temperatures. That said, most handles and tops are able to handle a good amount of heat.

Though most enamel dutch ovens do well at temperatures that hover around 400 degrees Fahrenheit all the way up to 500 degrees Fahrenheit in some cases, this isn’t the case with all. As mentioned, the difference is usually in what the lid knob and handles are made out of. Lid knobs and handles that are made of metal are generally able to withstand much higher heat than knobs and handles made of other materials. Thus, it is important to always read your manufacturer’s instructions on what temperatures are safe when cooking with a dutch oven in a conventional oven.

Can You Put a Dutch Oven in a Preheated Oven?

Placing a cold dutch oven into a hot oven will function a lot like glass would; it could eventually crack or shatter completely. To avoid this, follow the methods mentioned above and this will keep your dutch oven from being ruined.

Note: It is very important that you keep your dutch oven and glass bakeware from shattering. Not only are the pieces of sharp debris a hazard, but also, if you are putting a cold dutch oven with food in it into a hot oven, you run the risk of your dutch oven shattering. The food in it also comes into direct contact with a very hot heat source, which could ignite a fire. Therefore, it is imperative that you follow proper guidelines when using a dutch oven.

A cast iron dutch oven can absolutely go in the oven. In fact, almost any piece of cast iron cookware is oven-friendly. This is what makes cast iron so versatile and convenient!

In order to do this, simply assemble whatever you wish to bake in your dutch oven according to the recipe instructions, heat it over the stovetop first if required (this is often done for searing meats and combining ingredients in the dutch oven before baking, but it isn’t always necessary), add the lid (if required), and bake at the required heat.

That’s it! Most cast iron pots can handle any temperature, however, you will want to remember that cast iron itself can get very hot; therefore, handle the pot with care at all times, especially after removing the cast iron dutch oven from the oven. You may very well forget that the handles are hot!

Note: If it helps, after removing the dutch oven from your conventional oven, consider placing a towel over the handle or lid to remind yourself that it is hot.

Can You Put an Empty Dutch Oven in the Oven?

No, you should not place a completely empty dutch oven in the oven to heat. You can, however, place a dutch oven with a little butter or oil in the bottom to heat. Just be sure you do this at a relatively low temperature; otherwise, you may risk getting the pot too hot and end up burning your food.

How Do You Bake a Dutch Oven?

In order to bake in a dutch oven, you need a dutch oven (and a lid) that can withstand heat up to 450 degrees Fahrenheit or more. In addition, you’ll want to make sure that the lid fits tight.

If you don’t have a recipe specifically for a dutch oven, just be careful what you choose to bake as it may require different baking times than it would in a regular baking dish or tray. Moreover, remember that using a dutch oven in a conventional oven rather than on a stovetop means that heat is distributed from all angles, rather than from just the bottom, and as such, you may expect items that you bake to cook a bit quicker than they would if you had used your dutch oven on the stovetop.

How Hot Can You Bake a Dutch Oven?

We’re willing to bet you know what we’re going to say here, but the amount of heat your dutch oven is going to be able to withstand really does depend on the type of dutch oven you choose. There are so many varieties that you can choose from that it is nearly impossible to dump all dutch ovens into a single category.

Generally speaking, a dutch oven can typically withstand heat from between 400 to 450 degrees Fahrenheit, however, there are some types that can endure over 500 degrees. Dutch ovens that withstand these very hot temperatures are typically cast iron dutch ovens and come with cast iron lids, knobs, and handles. These types of dutch ovens are built tough and are an excellent addition to your cooking arsenal. 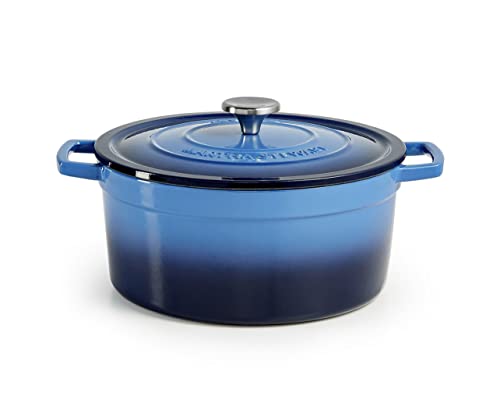 Can Dutch Oven With Glass Lid Go in Oven?

Yes, they typically can, however, you’ll want to ensure that you read the manufacturer’s instructions before doing so. Usually, glass lids withstand heat at no more than 400 degrees Fahrenheit or so, not only because of the glass lid but because of the knobs and handles as well. To know for sure, always do your research and know what kind of heat your dutch oven is able to endure to avoid destroying your dutch oven and ultimately ruining your food.

What Temperature Do You Make a Dutch Oven?

Foods baked in a dutch oven typically do best at lower temperatures. Baking in a dutch oven at a high temperature is rarely recommended. Still, if what you want to make does require a higher temperature, it is imperative that you know whether or not your dutch oven can withstand the heat. Some models can take up 500 degrees Fahrenheit, while most others fall into the 400-450 degrees range.

Why Can’t You Heat an Empty Dutch Oven?

Many recipes for bread ask that you preheat a dutch oven. When doing so, you’ll likely need a little oil in there or something else that would keep the dutch oven from being totally empty. This is because a dutch oven, especially if placed in a conventional oven cold, could crack when exposed to heat whilst empty.

Having said that, though many recipes call for a preheated dutch oven, it isn’t necessarily required that you do so. According to Le Creuset, preheating a dutch oven might not be necessary for baking a good load of bread.

Can a Dutch Oven Explode?

A dutch oven can certainly explode, and so can the lid.

To avoid an uncanny explosion from happening in your kitchen, please be sure to read the manufacturing instructions thoroughly before use. As boring as this might seem, it can save you from injury. Even before purchasing your dutch oven, you should be researching various types of dutch ovens. Select the correct one to fit your need and overall use for it.

Never use a dutch oven outside of the recommended heat settings. Also, never place an empty or cold dutch oven into a preheated oven. Check the dutch oven thoroughly for cracks also, as a cracked enamel dutch oven is very prone to shattering.

How Do I Know If My Dutch Oven Is Oven Safe?

The only way to know if your dutch oven is oven safe is to read the manufacturer’s instructions. Do not use a dutch oven that is only intended for the stovetop. Most manufacturers will let you know if the dutch oven can be used in a conventional oven and at what temperatures.

Dutch Oven in Oven With Lid

Remember that dutch ovens come with various lid types. Read the manufacturer’s instructions to ensure you know what conventional oven temperatures are safe for your dutch oven and lid.

Along with this, you’ll want to ensure that your dutch oven fits your oven before you start cooking, as some ovens are smaller than others. To do this, you may need to remove a few of your oven racks to get the entire dutch oven in your conventional oven, along with the lid.

A Dutch Oven Can Certainly Go in an Oven!

Yes, a dutch oven can most certainly go in an oven.

But you’ll want to watch oven temperatures and be sure to read the manufacturer’s directions before doing so. Never assume the correct temperature that your dutch oven can withstand.

We hope this helps. Until next time… happy cooking!