It’s against the (unwritten) rules to visit Philadelphia without getting at least one cheesesteak. These tasty treats are almost as much of a symbol of the city as the iconic Liberty Bell. However, what are you supposed to do if you have a hankering for an authentic Philly cheesesteak and you aren’t near Philadelphia?

Well, you make your own, of course!

The cheese is one of the integral components of a Philly cheesesteak. Without the right cheese, the taste just won’t be quite right. Read on to learn about the best cheese for Philly cheesesteak making in your own kitchen!

What is a Philly cheesesteak?

If you’re not already familiar with Philly cheesesteaks, let’s start by taking a look at the various components of this meal. Philly cheesesteaks feature frozen chip steak or other very thin slices of beef. The steak pieces are cooked on a hot grill and then placed on a roll with cheese (we’ll discuss the traditional types of cheese used below). When you make or order a cheesesteak, you can also choose to add onions or leave them off.

Two brothers from South Philadelphia, Pat and Harry Olivieri, created the first steak sandwich at their hot dog stand in the 1930s. After their steak sandwiches quickly gained popularity, others began offering them too.

However, these original steak sandwiches were missing one of the crucial components on today’s Philly cheesesteak: the cheese. It is believed that one of the employees of Pat Olivieri’s steak sandwich shops, Tony Lorenzo, was the first to add cheese to the sandwich.

What cheese goes on a Philly cheesesteak?

When you’re making a Philly cheesesteak and deciding what type of cheese to use there are a few different options to consider. You can go with something more traditional, or you could experiment with different types of cheese or some of your favorites to make more of a unique sandwich.

What cheese is normally on Philly cheesesteak?

Let’s start by taking a look at the more traditional/common cheeses that are used when making a Philly cheesesteak. The three primary options you’ll have to choose from if you order a cheesesteak in Philadelphia are Cheez Whiz, provolone, or American cheese.

While Pat and Harry Olivieri didn’t want to keep cheese at the original sandwich shop to ensure it remained kosher for Jewish friends and clients, Frank Olivieri, Harry’s son, started adding cheese to sandwiches when he was working. You may be surprised to find out that the cheese that Frank was using was , provolone, or American cheese..

One of the main reasons he used provolone, or American cheese. was because it sprays out of a can, and he could just keep it hidden next to the grill and add it without being noticed by his father.

As more and more people tried Frank’s version of the steak sandwich made with provolone, or American cheese it became quite popular. 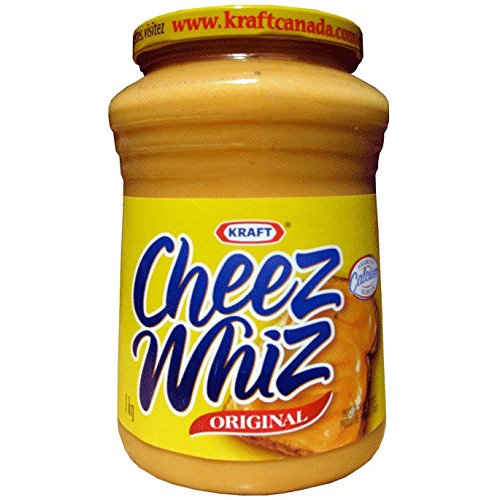 Provolone is another cheese that is often used when making Philly cheesesteaks. It has a semi-sharp flavor without being overly strong. It can offer a nice complement to the steak on the cheesesteak, especially when hot and melted. If you like onions on your Philly cheesesteak, they’ll also taste delicious with the metly provolone cheese.

Finally, if you’re ordering a cheesesteak in Philadelphia, another cheese option you’ll likely have is American cheese. One of the nice things about American cheese is how creamy and tasty it becomes when melted.

While you may not get a choice when you order a Philly cheesesteak from a restaurant, if you make your own at home, you can choose to use either white or yellow American cheese. White American cheese has a bit more of a mild flavor, while yellow is just a little tangier. Either could nicely complement your Philly cheesesteak. Just think about which flavor profile you’d prefer.

Other Cheeses to Add to a Philly Cheesesteak

While provolone, or American cheese are the more traditional options that are offered in most Philly restaurants, you can stray away from traditions when making your own Philly cheesesteak. There are no rules saying that you must use a specific kind of cheese. If there is a particular type of cheese that you like, and you think it would taste good melted over the thinly-sliced steak of a steak sandwich, go for it.

Below are a few other types of cheese that you might want to try when you make your own Philly cheesesteak.

Cheddar is a sharper and stronger cheese than those traditionally featured on a Philly cheesesteak. If you like cheddar’s sharper flavor, then adding it to your sandwich is a great idea to try. While you could use any type of cheddar, we think you may like to try a sharp white cheddar cheese. The added tang and sharpness of this cheese with the steak will be absolutely delectable.

Again, swiss isn’t a cheese you’ll see offered in most Philly sub shops, but you may like the way it tastes on a Philly cheesesteak. Swiss has a relatively mild and unique flavor. It also has a touch of nuttiness to it. Just make sure to give the cheese plenty of time to melt over the steak for an enjoyable meal.

How to Make Your Own Philly Cheesesteaks

If you’re ready to make your own Philly cheesesteak at home, here is a recipe to try.

Remove the steak from the freezer, and slice it.  Work carefully to make the slices as thin as possible. Once sliced, sprinkle a little salt and pepper over the meat.

Slice the onion.  Heat a skillet over medium-high heat.  Pour in 1 tablespoon of olive oil.  Heat the oil in the pan, then add in the sliced onion.  Cook the onion for about 15 minutes, or until it becomes very soft and begins to look caramelized.  Remove the onions from the pan.

Add the other tablespoon of olive oil back to the pan.  Place the steak in the pan, spreading it out into an even layer. The steak should cook in less than five minutes. As it is cooking, stir it and flip it periodically to ensure it all cooks through.

Lower the heat on the skillet and put the onions back in with the cooked steak. Stir the two ingredients together. Then, separate the mixture into two sections (one for each sandwich), and place two slices of provolone cheese over each section. Give the cheese time to melt, then give everything a quick stir to combine all the flavors together.

Add the cheesesteak mixture to the toasted hoagie rolls.  Serve and enjoy.

While many people could happily eat it as a meal, Philly cheesesteaks are better when paired with some delicious sides. Some of my favorites include French fries, onion rings, potato salad, grilled peppers, and jalapeño poppers.

The Best Cheese for a Philly Cheesesteak

If you’re looking to make a traditional Philly cheesesteak that copies something you could buy in Philadelphia, you can’t go wrong using provolone cheese. or American cheese. However, because there are no set rules for making a cheesesteak, you’re also free to experiment and try using other types of cheese that you enjoy.

Are you ready to try to make your own Philly cheesesteak in your kitchen?

What type of cheese do you think you’ll try?